A simple Thank You made him smile

Today, I was driving home from Houston, and came across a car that was from Indiana (I think...couldn't see the plate too well).  You could tell he was a soldier because he had the little oval tags for Iraq and Afghanistan in the back window.  As he passed me, he looked over at me and he seemed a little sad the way he looked at me.  Then it hit me...I'm going to tell him Thank You while driving down the road.  So, I took out my military dependents ID card and held it up to where he could see it.  Then I signed "Thank You" in sign language, while also saying it with my lips.

He SMILED, and signed "Welcome" in sign language.  He also seemed a little more upbeat in the way he sit in his car driving down the road.  His head was no longer down a little bit, he looked up with pride.  I'm pretty sure he was headed to Fort Hood because he took the 190 exit off of 59 N.

This little act of kindness made me feel better because I brought a smile to someone, who really appeared a little beat down.  And I know it made him feel just a little better that someone would actually say "Thank You" while driving down the road.

Soooo...I know this is a bad picture, but there was a lot of traffic, but if anyone knows this guy, tell him I am glad I made him smile. 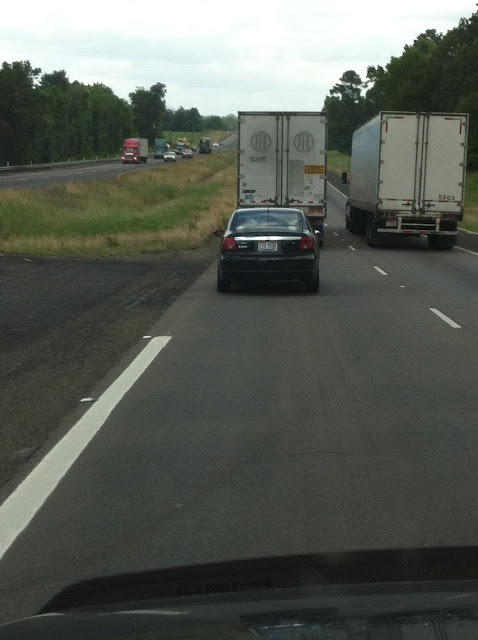 What does Memorial Day mean to you?

This weekend is a holiday weekend.  Most people care about the 3-day weekend, and BBQ picnics.  In our family, we remember.  My husband, Mike, usually sits by himself and reflects on the past.  Mike is haunted by the past.  He has survivors guilt.  Constantly wondering why he didn't die also.
I have no answers for that.  I don't even know why, except that he is here, and one of his soldiers isn't.

Memorial Day is defined as a day of remembering the men and women who died while serving in the United States Armed Forces.  But for those who lived it, that's every day.  They don't forget.
(Here's my two cents worth coming in now)  I think that the reason Mike's PTSD keeps getting worse is because of the survivors guilt.  I don't think he deserves to have a family when his soldier didn't get that chance.

There are certain days of the year when I know to leave Mike alone.  I have given up so much to be with him.  Because of his PTSD, he avoids crowds, he doesn't go anywhere, and he really doesn't sleep anymore.  I told him yesterday he reminded me of my grandpa, who served during the Korean War.  I don't ever remember him sleeping with my grandma, he had his own room.  He would never leave the house, and he hardly ever slept.  He would be up at nights when we visited and just sit on the porch.  That's about how Mike is now.  I can't remember the last time he came to bed with me...though at times he comes in later.

Would most wives be supportive of their husband staying up all night because they can't sleep?  Would most wives be supportive of their husband playing a video game all the time?
Would most wives be supportive of their husband just walking off by themselves?
I support all of these!  These are the quirks that I've learned to live.  I listen to him talk about a game I have no interest in...it's his escape.  His "therapy".  I've given up many things for him.  The PTSD has gotten so bad that we hardly go to sports games anymore...even if we could afford it.
While I'm on that thought...while you're enjoying your weekend, and ALL THOSE SALES AT THE STORES...please REMEMBER that there are soldiers that are still appealing their disability...still going month to month eating beans and rice.  YES...that's what we've been eating for about a month now!  Still calling the VA to try to get things rolling...which with this system takes forever.

What I wouldn't give to have just one week where we didn't have to worry about ANYTHING!! Where we can have an enjoyable week, doing anything...which for Mike right now would be camping and fishing.  Hey, I would take that because that means that it's a vacation.  A week without worrying, without him watching out the front window.  A week of relaxing.  A week of enjoying a lot of food, without worrying if we're going to have money at the end of the month.  A week to see a smile on his face.

So, while you're having a great weekend, and shopping those sales.  Please, please....remember people like Pfc. Jesse D. Mizener, who was my husbands soldier who didn't make it back.  This young man, whom I've never met, has impacted my life so profoundly.  We do think of him and his family on a regular basis.

DisneyLand is going to have to wait...

DH (Mike) and I decided earlier this year to save for DisneyLand for Monster.  Now, it's going to have to wait.  We've been put in touch with a company that provides PTSD service dogs and we're trying to get one for Mike.  We talked to his doctor today about it and his doctor thinks it's a great idea because Mike's PTSD is so bad.  Sooooo, the little bit that we had saved for DisneyLand is now in a fund for Mike's Service Dog, and we're trying to raise the money for just the down payment.  The total cost of the dog is estimated at $30K (no exact figure yet until we sign the contract with the down payment.)  So, I've set up a gofundme.com page.  And, we're going to try to raise the money for his dog.  In the coming days, I will also be posting my purses online to sell.  Anyone that knows me knows that my purse collection means a lot to me, and I will be selling all but a couple of them...like the one that has my name on it.  All of this money will go towards the fund for his dog.
We can save next year to go to DisneyLand with Monster, and since he will be 5 instead of 4, it may be better.  Not to mention, I think DH was procrastinating on DisneyLand because of the crowds, and with a service dog, there's still the anxiety, but it might be less, and I know he was willing to face all that anxiety for Monster...DH would walk through fire for his son and so would I.  I've always believed that everything happens for a reason, and we just don't know those reasons.  We're given the trials that we have because God knows we can handle them, not because we think we can handle them.

DH has also agreed that anyone that donates at least $10 can get a photo signed by both of us of either him and his new dog, or us as a family.

Happy Birthday Monster and a GIVEAWAY!!!

Sunday was Monster's 4th birthday.  (Where has time gone?)  Instead of one party, we did a couple days of celebrations.  It started on Thursday.  We took Monster to one of our favorite stores for NEW BOOTS!!! 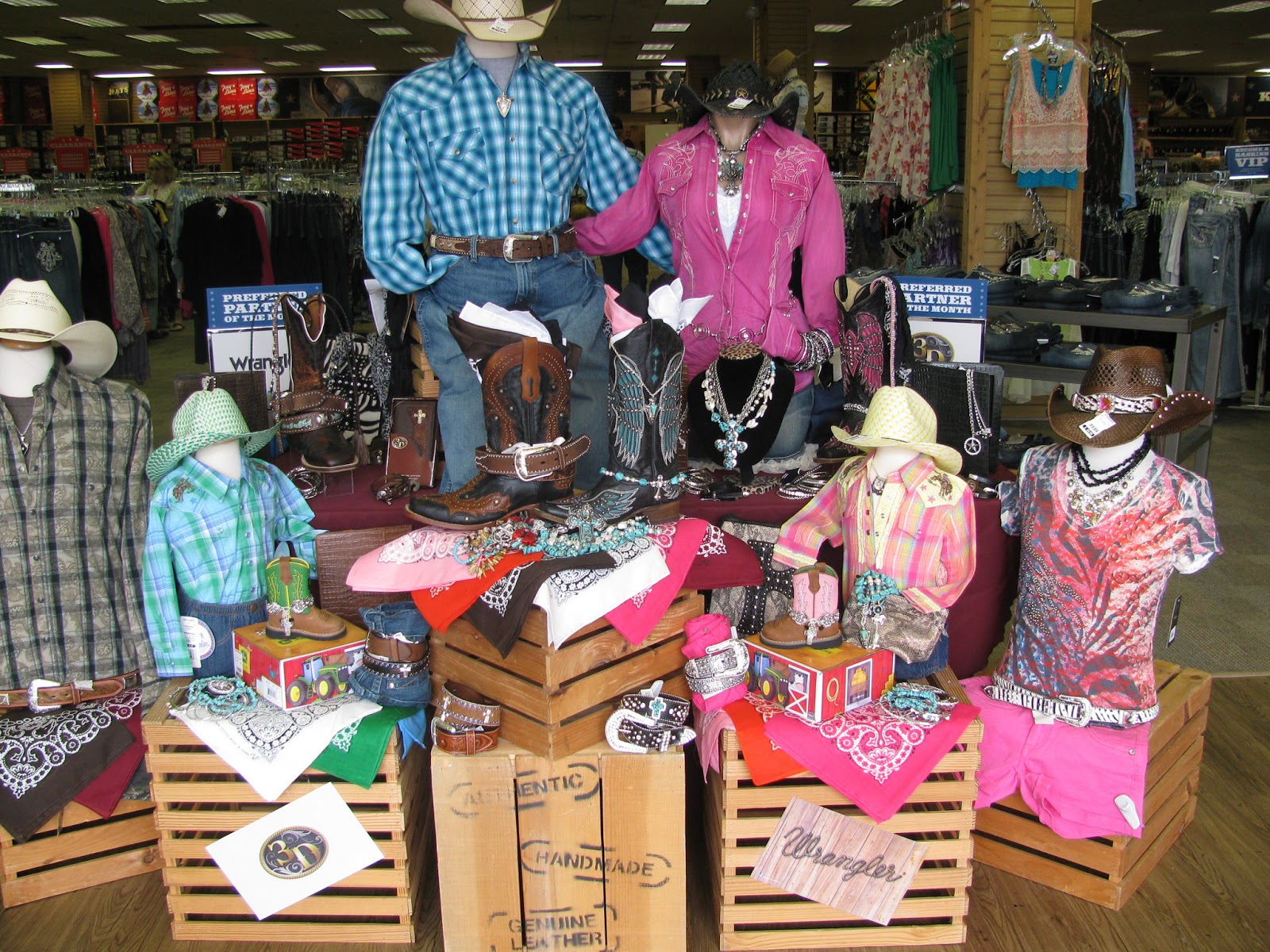 I LOVE walking into a store and seeing a wonderful display like this!!! There's a lot of hard work here!!
Now, on to the BOOTS section! 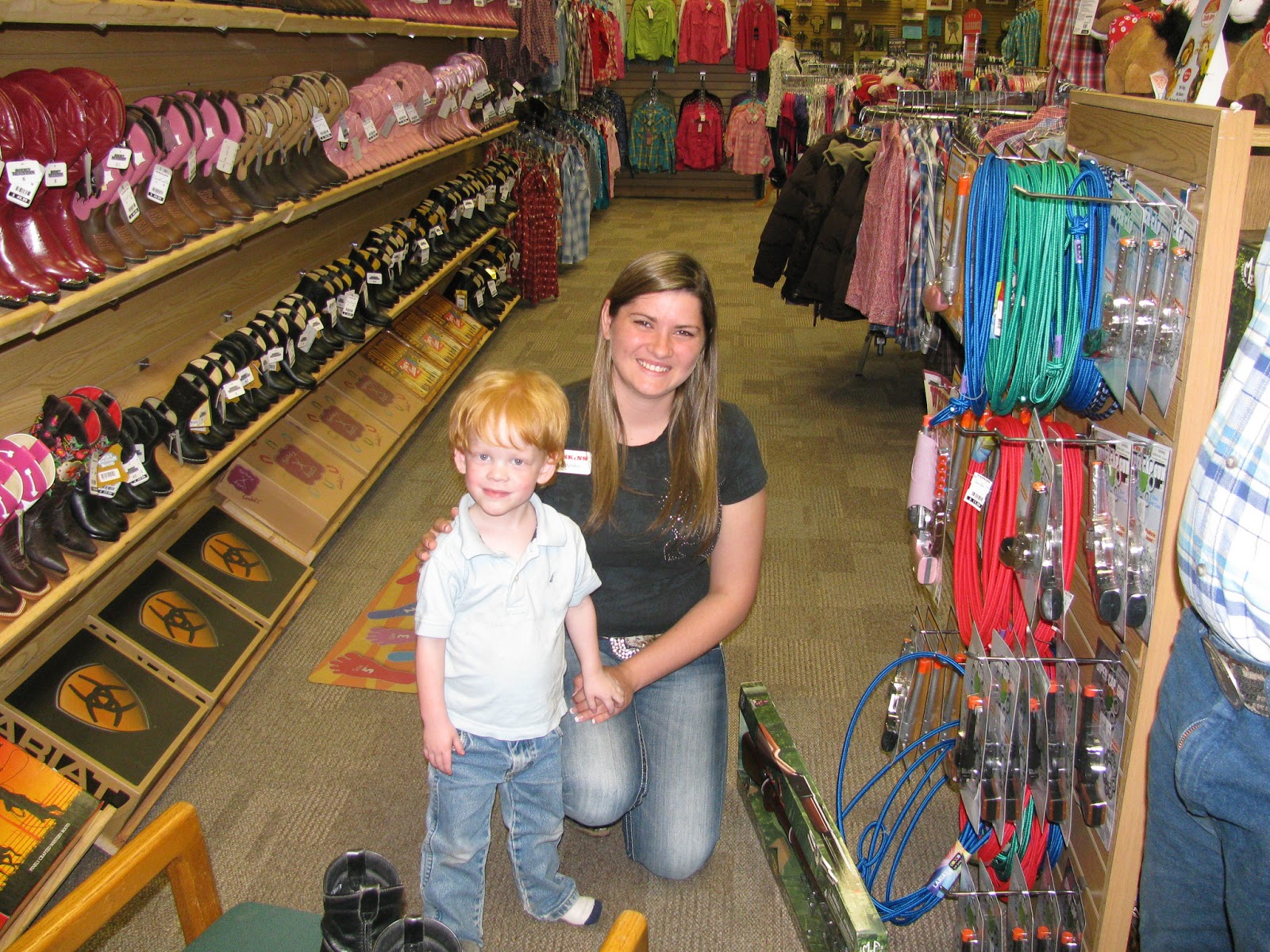 This is the lovely saleslady that helped us with finding the right size for him...and it was hard because he didn't want to hold still. 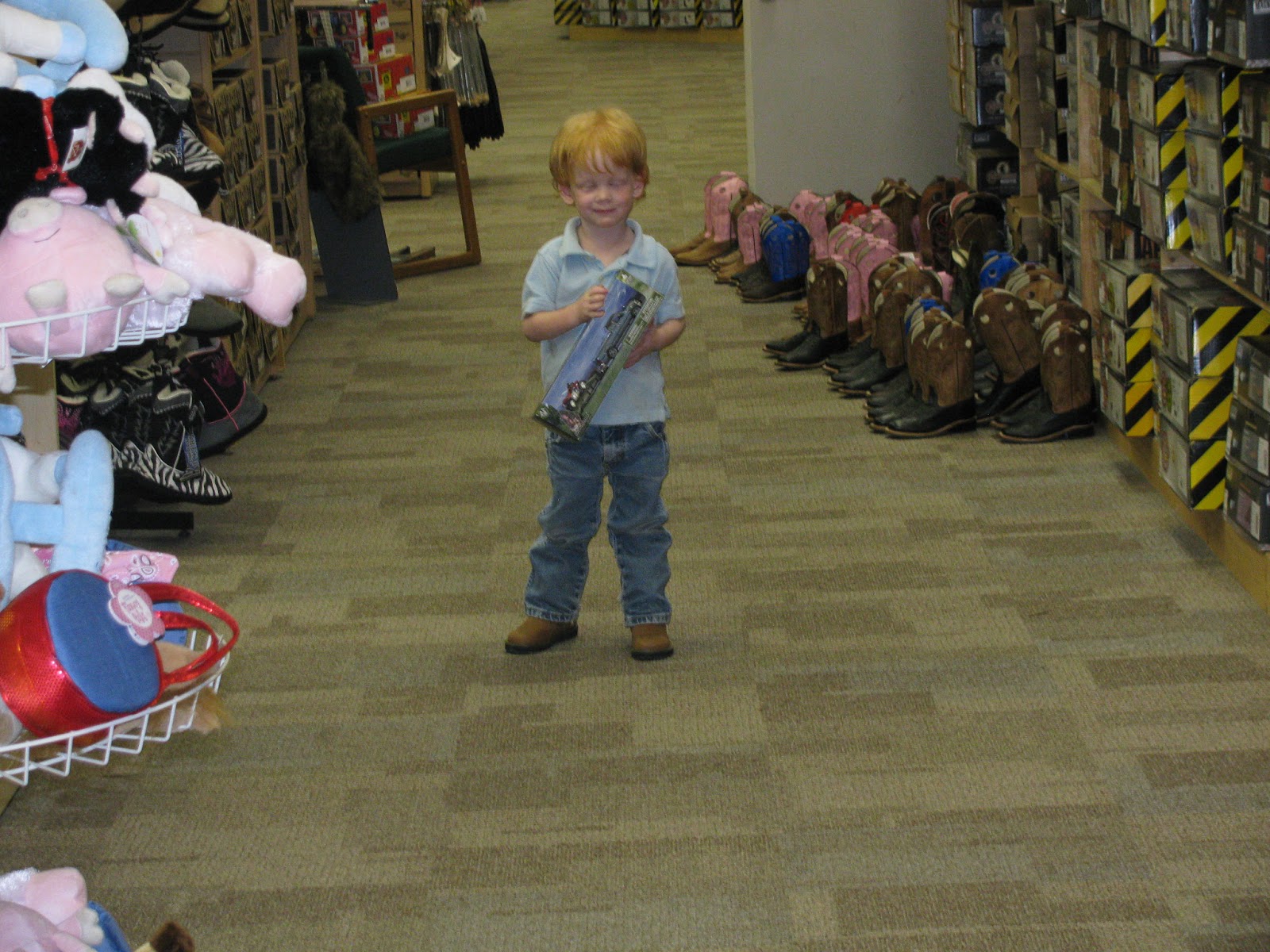 Here he is walking down the row to try on the boots.  He was more interested in all the trucks they had over there. 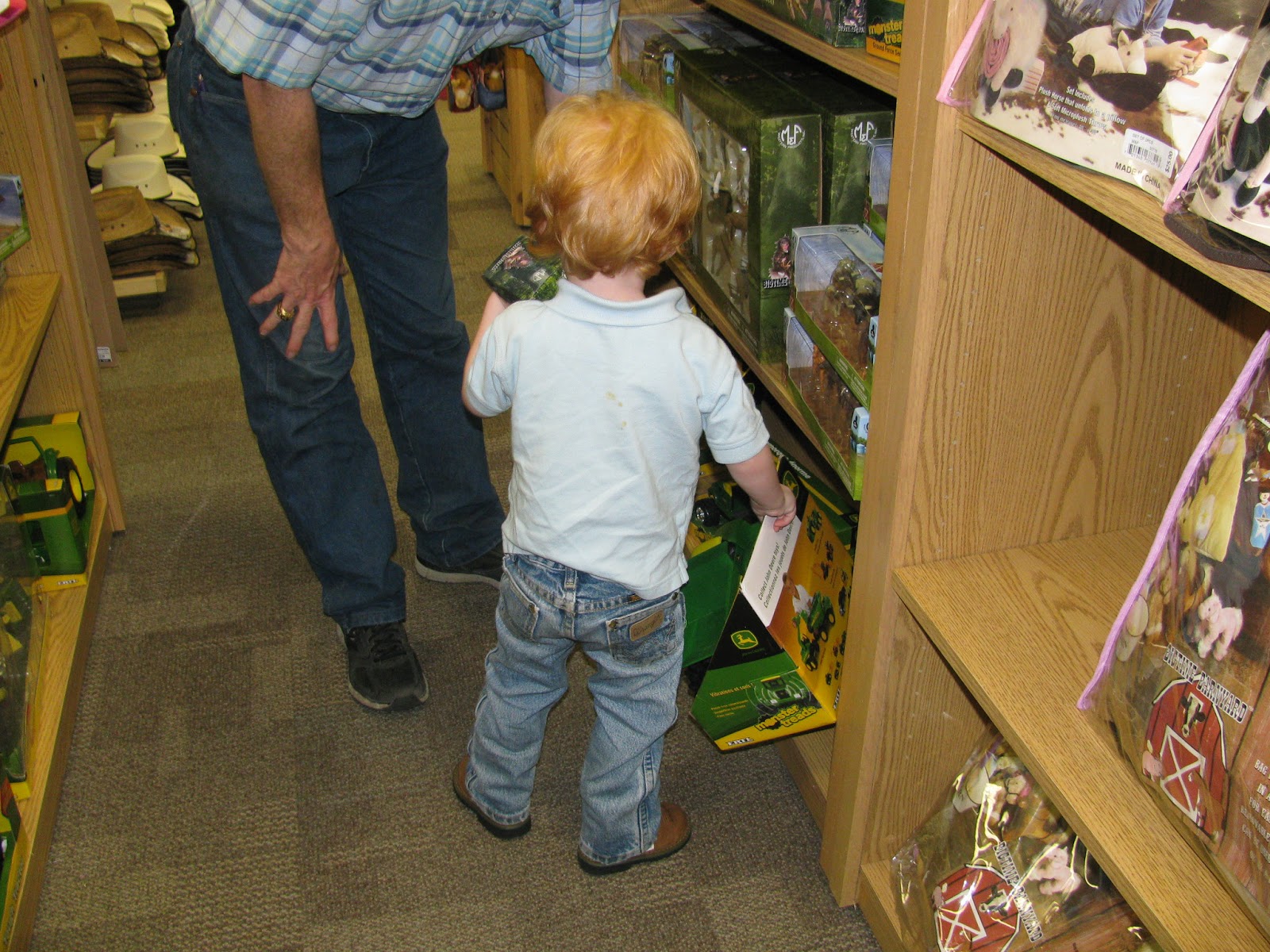 So, now Monster has a new pair of boots, and of course we can't get these off his feet either.
We also went to the Houston Zoo with him, and he got a BIG BOY BED.  But that will be another post.  So...now for the giveaway!
Baskins has generously offered a pair of Justin Boots to one lucky reader! I'm so excited. 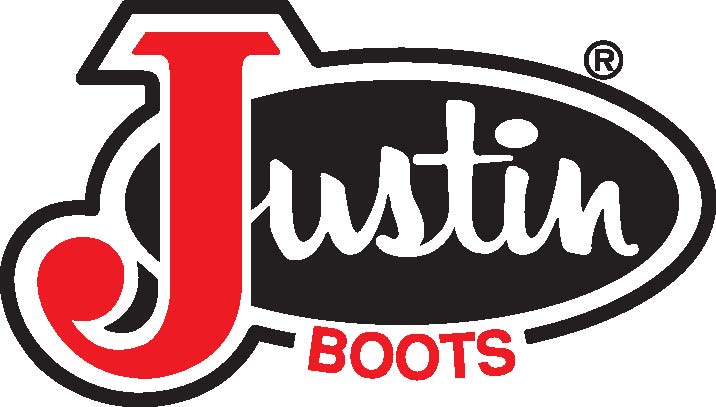 I HATE being made to feel like an idiot!!!

Yes, it took me a full day to calm down enough to actually post this.
Am I happy with Hudson ISD right now? NOPE!
We had Monster's ARD last week, and I felt like I was in front of a firing range...I was totally blindsided by what they had to say and I believe it is because I threw a fit because THE SCHOOL withdrew him from school, after only missing THREE days!
Only one week prior to this ARD, the teacher had assured both DH and I that Monster would be in PPCD half a day and also Pre-K for half a day.  When we went to the ARD, he was suddenly so much better with his speech and behavior that he didn't need PPCD anymore.  DH and I both didn't know what to say at the ARD...we were both floored.
Then, on Monday I called the Superintendent and was referred to Peggy F.  who is the Special Ed coordinator.  She agreed that it needed further investigation and asked if a meeting on Tuesday would be OK.  DH and I both agreed and we went to the meeting.  It started out with the Principal, his teacher, and Peggy F.  The principal started talking to us like we were idiots and that we needed everything explained to us.  I felt like he was one step away from using sock puppets with me.  Then...the speech therapist, some other lady that works with Special Ed ( I still have NO CLUE why she needed to be there) and another lady that I neither met nor saw before the ARD.  I think they realized that I was pissed because I shut up and accepted whatever they said...AGAIN.

So, this meeting did NOT GO WELL and I don't know where else to turn, except to hire an attorney.
Am I happy with how well the school has performed with Monster? YES
Am I happy with his improvements? YES
Am I happy with the outcome of the ARD? HELL NO!!!
DH and I both believe that Monster still needs the same amount of speech therapy that he has been getting, but the school thinks differently.  Even compared to a friends daughter, whom the state of Michigan put in speech, Monster is talking nowhere near as well as her.

So, I rolled over like an idiot and shut up because I don't know where to appeal to or who to appeal to and I certainly DO NOT want to talk to these people again.  I feel that Monster is smart enough to be in Pre-K and has been since he started school, but it's still very, very hard to understand what he is saying.  So, instead of hiring an attorney...I'm doing the next best thing...I'm posting this on the internet.  I'm hoping that someone forwards this to the State of Texas and they actually do something about this!!!
Posted by Marci at 5/01/2013 10:09:00 PM No comments: