So I've been AWOL (Absent without leave) for a while.  This has been a hard year as I've had bronchitis a record 5 times (a record for me anyway).  So, I've not been feeling the greatest and have barely been online, and when I have been online, I've been slacking...to say the least.

So, I figure I will end the year with a giveaway!!!!! There is one contest that I've entered Monster in and (when you see the pic) you have to admit, he's rather cute!  All you have to do for this giveaway is vote for him one time...but to give you extra entries, I'm going to include another contest (with daily voting) that I've entered our Christmas lights in.  This second contest is a gift card, and we could really use it right now as my car needs a new motor and I'm having to fight the warranty company for the repair.  Ack?!?!

Soo...without further ado.  Here's a pic of the Journey Pendant I will be giving away 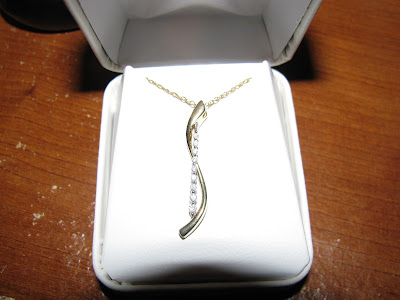 Also as a footnote for those that stalk and try to cause problems for me...both of these contests say to get the word out...they do not say that I can't host a giveaway for votes...so please don't waste your time!!!