So, I saw this on the internet on Monday. 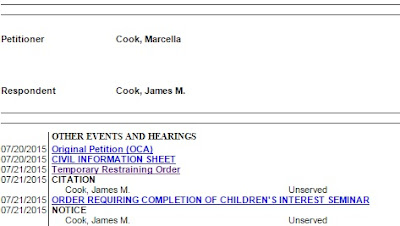 Yeah, that says I filed for divorce.  And it also shows one of my biggest failures.  I've always held true to my marriage vows.  I've loved and respected my spouse.  Through thick and thin.  This time though, it was really hard for me to even think of going back.  And, in a way I'm glad I didn't.

First off, I have to say that a post about Chicago is coming up soon.  Right now, I feel that another post needs to be written.

In the past two weeks, I have seen the best of people and the worst of people.  I have been betrayed by family, and found support in the unlikeliest of places.  I have also come to have a deeper understanding of my own strength.
P.S. You never know how strong you are until you are put through the test...I think God likes it this way.

Last Saturday, I explored Chicago, and had lunch with a great friend...again...later post.
I went back to the hotel and got ready for the awards program for PBL.  I was having a good time, taking pictures of all the Texas people, etc.  Then about halfway through, I got this text. 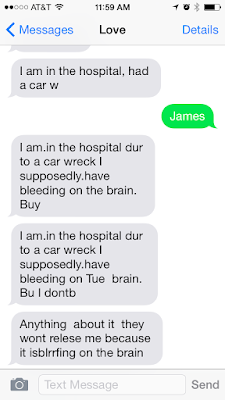 As you can see, Mike was a little disoriented and confused.  Now, here's the kicker...the hospital let him invoke HIPPA, and make himself Non-Disclosure...even though he was altered and went in with a brain injury.

I was frantic, and scared.  I found out that Monster was OK, but that was only the beginning of this nightmare.  Since Mike was confused and disoriented, I asked to speak with a nurse, none in there.  I asked to speak with a doctor, someone, anyone...to find out how my husband was doing.  No one was around, but he did say that his brothers were there at the hospital.  So, I called Stacy, since it was the only number I had.

I found out from Stacy that they were waiting on the neurosurgeon.  I asked him to call me if anyone came out to talk with him about Mike.  I never got that call.  Instead, I called the ER to find out about my husband and found out that he made himself non-disclosure and that we were supposedly in the middle of a divorce.  (This was news to me)  I then told the nurse that I'm not sure he could have invoked HIPPA because he was confused and disoriented, and apparently if they're awake and alert, and at least know who they are, where they are, and what day it is, they can invoke it.  Personally, I think he was told where he was and what day it was because he didn't remember anything.

So, on Sunday, I flew home.  And I drove straight from the airport to the hospital.  Before they remembered that he was non-disclosure I found out that he had a sub arachnoid hemorrhage and also that he was transferred that morning.  I was in the process of finding out when the unit clerk remembered that he did invoke HIPPA.

Oh wait....it gets better. When I got through with the hospital, I went to the house.  And found out that my husband had emptied it of everything of any sort of value.  After about an hour of crying, I called the police.  At least I could try to find my son.  When the police came, he was apparently shown old papers from CPS because he wouldn't file missing persons OR let me see my son.

Sunday night, I decided to try to use the Wi-Fi at Whataburger.  First off, I put my keys down somewhere and forgot where I put them.  Now, when things like this happens, I stop and thank God because he wants me to see/hear/find something particular.  After about 10 minutes, I found my keys and went on my way.  There was a group of teens there that overheard me talking to my mom and asked me if they could pray over me.  Of course I agreed and  felt a little more at peace.  THEN, this same group of teens told me they didn't have much but they opened their walled and gave me every penny they had..

Now, comes Monday.  Mike gets out of the hospital and tells me that he was in Tyler.  He also asked me to pay the electric bill, but I can't with no money.  Then came the subject of the empty house.  Apparently, Mike got it in his head to leave me while I was in Chicago.  He had emptied the house and then disappeared.  He was also with Weldon, and Weldon always convinces Mike to drink.  Then I found out where Monster was and it was a race to see who got to him first.  Needless to say, they did.  So, I haven't been able to see or talk to my son all week.  And, even though I'm talking to Mike, I feel that it is going nowhere.  He won't even come up here to meet with me and have a meal.  He said yesterday that he didn't want to meet with an angry person.  BUT, I'm not angry or upset...I feel betrayed more than anything.  This may sound harsh, but I am giving Mike until tonight to meet with me and straighten some things out.  I DO NOT WANT A DIVORCE.

On Monday evening, when it was apparent that I lost Monster, I could only think of one place to go, and that was The Wesley Foundation house.  Never did I imagine the kind of help I would get there.  There was a girl there that was told of my situation and offered me to use their spare room until the end of July when their roommate comes back.  I never imagined that my friends would reach out and help me.  I've always thought that they were just friends, and not close friends.

On Wednesday, I went to go see the car.  Seeing it, I'm surprised that my husband is still alive.  (Again, another blog post about this)  Because of the kindness of acquaintances I have a roof over my head until the end of June.  I still need to find an apartment, and I still need to come up with the funds for a deposit, and enough to pay rent until I get an income every month.

I'm still working on things...but I also have to protect myself from future actions.  I told Mike yesterday that I may be getting a divorce because I need to protect myself from future actions like this.  I don't know what the future holds for me, but I do know I'm on the right track.  So, that's why I haven't been online much lately.  I'm not sure if I"m going to  come back.  Before I close this one, here's a couple pictures of the truck: 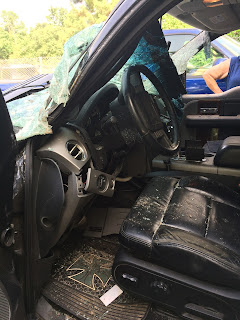 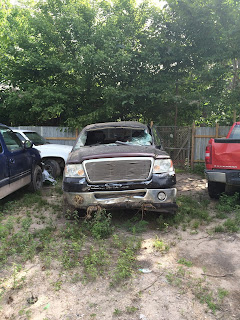 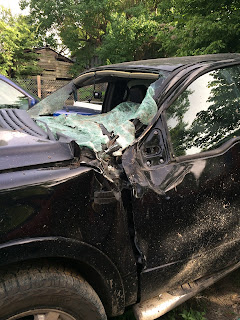 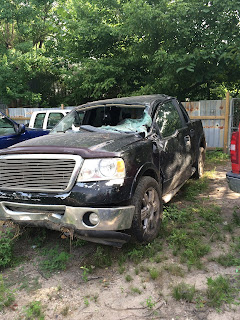 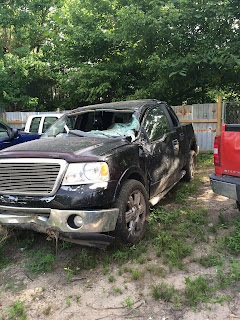 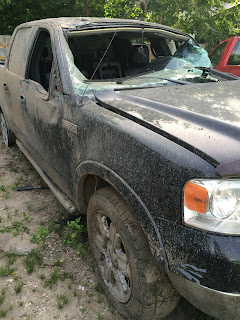