First off I want to say, yes, I care about what happened in Paris, and I would love to help, however, right now I have more pressing issues.

I've said before, and I will say again...my faith is great!  I know that God has a plan through all of this ugliness.  And, yes, I will follow his plan.

With that being said, I never said I had to like his plan.  In fact, I think this whole situation sucks! In tmy opinion, he landlords still think that they can get out of the Fair Housing complaint because the lease stated "underlined and highlighted" "NO DOGS!" The problem with that, service animals aren't seen as dogs, etc...they are assistive devices.  They help people with disabilities.  There's no way around that one...the violations are there, they should have just said, thank you for telling us we were wrong how can we fix this?

Then, the male landlord came by the other day, and besides making me late for class, told me that they are going after me for defamation of character because I'm putting what they do on the internet.  There are several websites that list the difinition of defamation as :
the act of making UNTRUE statements about another which damages his/her reputation

What I post is TRUTH!  And, how the heck can this damage your "reputation" when you bragged that there were over 200 people in your bible study last week?  Seriously?  Damaging your reputation?  I have been a blogger for over five years, I think I understand the first amendment that allows :
FREEDOM. OF. SPEECH.
Yes, it's true that you raised your voice at me, and I will be uploading that soon.  Yes, it's true that you turned that power off, and Nacogdoches police called you about it...and you still kept it off for a WEEK.  I had over $300 worth of food in the refrigerator/freezer...which went bad because of this.

And, it's not my fault that you're paying for a hotel for the roommate who (again in my opinion) is not acting with the best maturity in this whole situation.

So, it's tomorrow.  I have friends that are going to help me pack up what little I have, and put it all in a storage trailer until I can get my own place again.  Yes, I will be sleeping in my car. I've called Godtell, and if I went there I would have to attend Bible study twice a day, which I have no problem with, and would actually welcome it...however, I have my prior commitments that keep me out past 7:00PM every Monday, Wednesday, and Thursday and I will not shirk my responsibilities at school.  I made a commitment and I will abide by it.

P.S. I did go drown my sorrows in Friday Night Magic, and it was Modern night, and I totally LOST!!  I need to work on my decks and see where to go from there!  BUT...this is a learning process and next week I'm sooooo going to win at least one round!

I have to get ready for Showcase Saturday at the school, then there is a football game, and also a basketball game...I think I'm going to be quite busy today.  Don't worry about me getting my stuff packed...remember...Army wife, I can knock this all out in about 1-2 hours!

Have a GREAT SATURDAY!!

P.S. Here is a picture of some of the $10K in damage I supposedly did to the tile floors!! 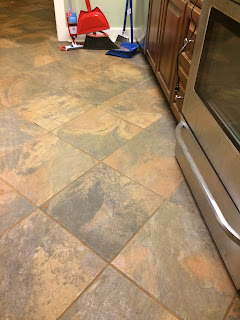 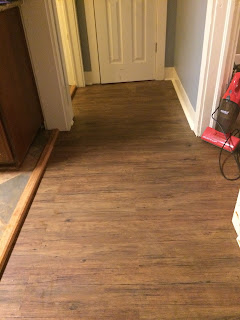