A Trip to the Dentist, A Change of A Lifetime

Most of ya'll don't know this, but I've been afraid to smile since, well, middle school.
See, I've had the straightest teeth in my family.  BUT, I've also had big front teeth and one had a cavity in it, so you could always see the filling, even though they made it white.  So, I went through school, and life, with low self esteem because of my smile.  When I was 13, my brother accidentally knocked my front tooth loose.  We went to the dentist, and they said it was fine but that I might need a root canal. Well, things got hectic in the family and that never happened.  Throughout the years, my tooth would occasionally turn gray, and then turn back.  I never had any pain, but I knew it was dying.

Then, I had my oldest son.  You know how they say that in some pregnancies, no matter how much vitamins you take, that the baby will "steal" the calcium...yeah that happened with BooBoo.  After I had him, I had to have 2 teeth pulled because they broke.  They never had cavities or anything, they just broke.  We couldn't afford the dental treatment, and it was cheaper to just pull them.  That started the whole cycle of teeth breaking and getting cavities easier.  I still brushed and flossed twice a day, but it never helped.  I also couldn't afford dental care, so I did what I could.

Then, in 2006 I started having seizures.  The doctors put me on Dilantin, and that pretty much sealed the coffin for my teeth.  They started rotting from the inside out.  I frequently had abscessed teeth, but could only take antibiotics because back then I couldn't afford the dental care.  Then, I married Mike.  We had dental care, but never the time for me to go to the dentist and get everything taken care of.  Slowly, my teeth broke and got worse.  During the past 7 years, I was either pregnant, or he was in school so I couldn't have someone to drive me home after the dentist.  So, we waited.  Then...I had the time, and funds, and I wasn't pregnant, so this past week, I FINALLY got my teeth done.

Of course, because I'm cheap and like to save money, I only got the top done right now.  I'm going to wait until October when my insurance resets to do the bottom.  And, OH what a difference this makes.

I never cared about my looks, didn't wear make up often, didn't do my hair, except in a ponytail.  I knew people judged me because of my teeth.  I was always afraid to smile.  So, I'm going to show you, for the VERY FIRST AND LAST TIME what I looked like before I went to the dentist.  I've also put a watermark across it so that no one can steal this picture, so please don't mind the watermark across the picture. 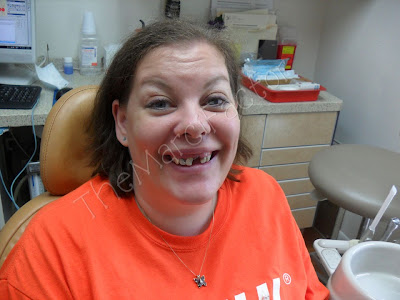 Here, you can see how bad they were.  The front tooth that my brother hit was the first to go because it was already weak.  All of them were rotting from the inside out. 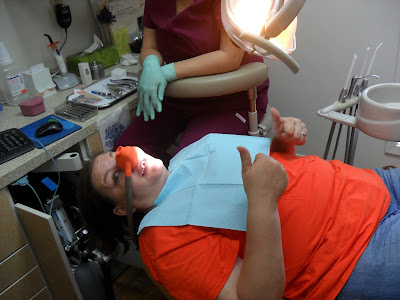 Yes, I chose the gas because I was extremely nervous...can you tell by the look on my face that I was scared to DEATH!! 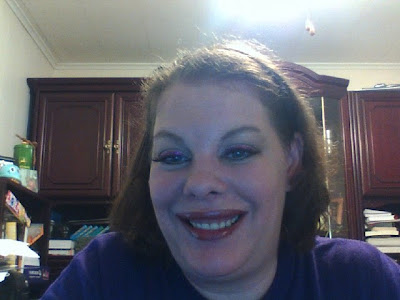 And now, less than a week later...I CAN'T STOP SMILING!!! I haven't felt this pretty in a very long time, and I think my self esteem has taken a big leap in just a few days!

So, I've posted this so that other people on Dilantin and other medicines that make your teeth go bad aren't afraid to smile!  Everyone always told me I was beautiful, and I would agree with them, but I didn't feel beautiful.  Now, I really do feel beautiful!  And, I've noticed that people do treat me differently already...so people, if you're one to judge a person because of looks, there's probably good reasons for it, and you shouldn't judge!!!!!