﻿I got a chance to review a GREAT album for Monster. Since he was a little Monster, we realized he had an affinity for music and I've wanted to expose him to all different kinds of music.
So what is Eats Paste you ask? Well...it is an album put out by Toy Block Music, which is a project that is "dedicated to the idea that children understand, and deserve real music done by great musicians." So what does this mean to us? Great music that even this mommy was singing to. It's not the normal everyday songs sung with normal tunes. This is the music that kids LOVE with a twist! There's Pop and Funk mixed into the children's songs.
When I first played this for Monster he was quite intrigued and didn't know what to make of all the different kinds of music. But the second time we listened to it, he did his little imitation of singing (because he doesn't talk yet, he hums). So, this has been added to Monster's MP3 player for him to listen to at night and when he's down for naps. We also listen to it when we play outside on his swing set. I never miss a chance to expose him to music. 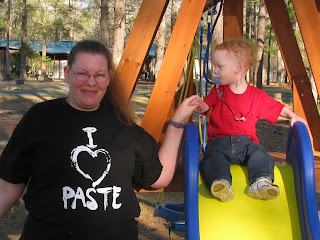 What is unique about Toy Block Music is that a portion of their proceeds go to PAGER (Pediatric/Adolescent Gastroesophageal Reflux Association) which is a non-profit association that has been providing information AND support to parents and children with acid reflux and related disorders since 1992. (cited PAGER website)
So, what can you look for on this CD. Well, I'm sure you've heard "Wheels On The Bus", you've probably sang it to your own child/ren. But, I can guarantee you haven't heard it like this. It's got a funky beat, and it makes Monster dance around EVERY TIME we listen to it. I will let you explore for the rest of the songs!
So, where can you get this wonderful album? Well, you can purchase it from Toy Block Music for $5.99 which is a great price! But, four readers of my blog are in for a treat because Toy Block Music is giving away 1 full length LP (digitally) and 3 single songs (digitally). So, that's FOUR winners here!
Now is the part where I tell you how to enter:
Mandatory Entry: Go to Toy Block Music and tell me why they donate a portion of their proceeds to PAGER. (one entry)
Extra Entries:
Follow me via Google Friend Connect (two entries)
"Like" Toy Block Music on FB and if you want, you can leave a little note saying Hi from us (one entry)
Follow Toy Block Music on twitter (one entry)
"Like" TheMarciFactor on FB (one entry)
Sign up for email via feedburner (two entries)
Tweet once per day "Win a copy of Eats Paste from @TheMarciFactor and @ToyBlockMusic until 3/21 http://bit.ly/dUvQnQ" (one entry)
**You must leave contact information (either twitter name or email in name at domain dot com form).
Posted by Marci at 3/01/2011 05:41:00 PM 1 comment: