It came out of nowhere...

I will admit...I'm a perfectionist...almost to a fault.
IT. KILLS. ME. IF. SOMEONE. IS. IRREPARABLY. ANGRY. WITH. ME.
I try anything to fix it, to repair what I've done in anger and I. CAN. DO. A. LOT. in anger.
It's taken me the better part of 35 years to learn to control my anger and I think I've done a good job.
But, there are times, however few and far between, that I let my temper get the best of me.
One of those times was when I was in the middle of my divorce with Stephen.

I. FELT. BETRAYED. AND. HURT.
Hurt beyond all that I've ever felt. E.V.E.R.
I also try not to feel guilty about my past, but there are those times...those little times that bubble up to the tip of my emotions, and SLAP. ME. BACK. TO. REALITY.
And it's those times that are the worst.  I wonder.  I hope.  I pray.  That someday, someway she will forgive me for what I've done.  I hope for that one phone call that says, "I miss you."

You see, Carol (Stephen's mom) tried to comfort me, quite often.  She would give me a hug, and growing up the way I did, I wondered what she wanted with that hug.  NO ONE has EVER given me any affection without wanting something in return.  So, I was like the little kid that didn't understand what was going on.  I usually walked around the house in amazement as to how someone could ever LOVE and ACCEPT me for who I was, without asking anything in return.  But, Carol did...and I hurt her more than I've ever hurt anyone in the world.  So, what am I trying to say here...I really don't know.  All I know is this needed to be said.
And another thing.  I MISS CAROL CARTER! 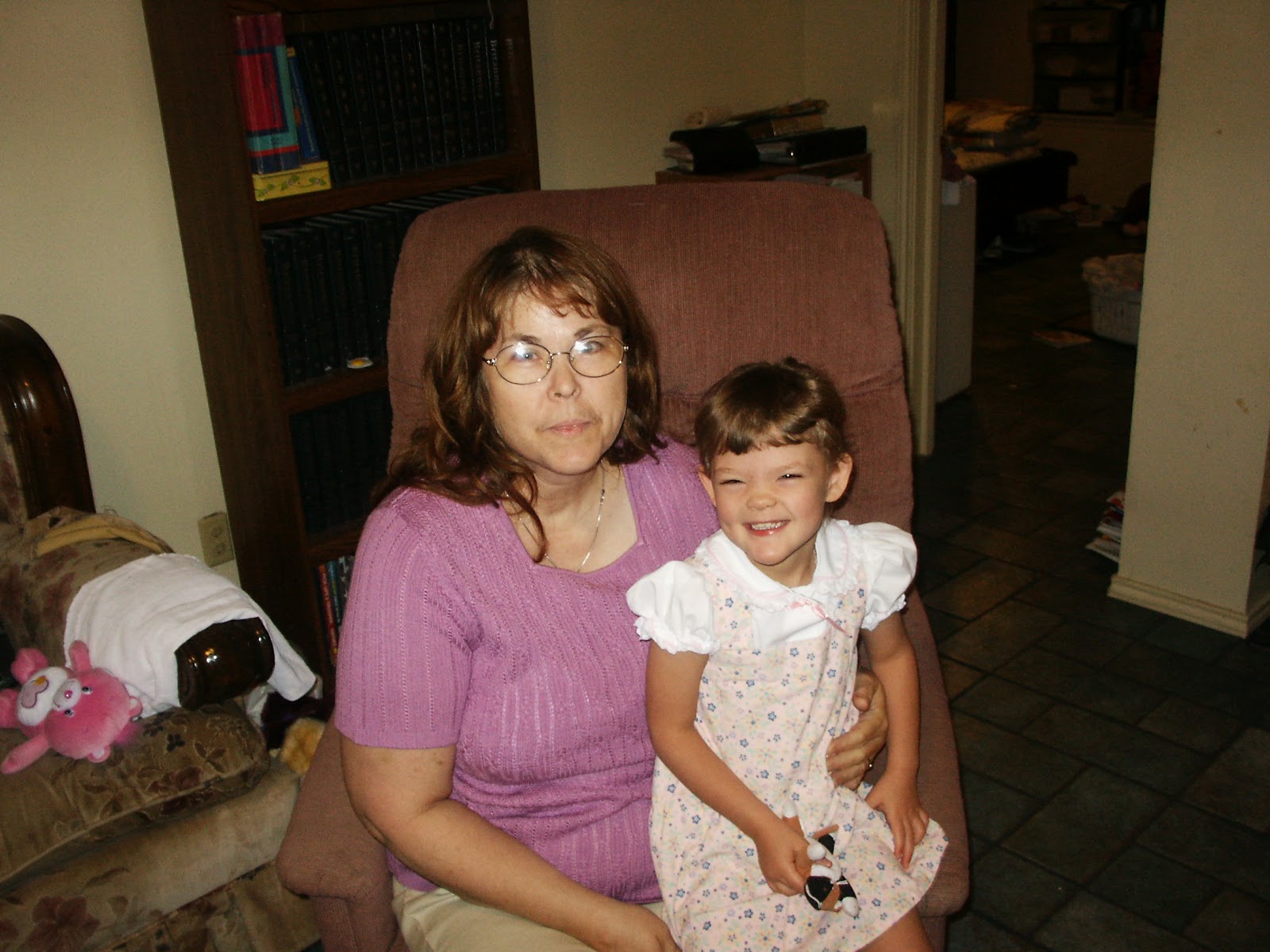 Do You Know That November is National Adoption Awareness Month?

I have to say, even though I was a little on the wild side and grew up very poor, I did lead a somewhat sheltered life.
In high school, I only knew one person that was adopted.  Just one.
My husband was adopted, along with his brothers and sisters.
So, why am I bringing this up now?  Well, because of adoption, I found myself in a funny situation.  Here's a little background:
Because of my farming interests I had a friend named Nelson on twitter.

I knew he lived in South TX, and he knew I lived in East TX.  Then, he said his daughter was going to SFASU in the fall, the same college as my husband.  I was excited and told him if there was anything that he wanted me to do to help her out, I would be there for him.  Well, shortly after school started was her 21st birthday!! He wasn't able to come to East TX to see her, but between the both of use we made up a surprise for her.

The really funny thing...I had never SEEN her or talked to her!  So, on her birthday we were talking on the phone and I asked him about some defining features so I knew who I was looking for.  All I had was her name.  So, when he said "she's got black hair and brown eyes, she's black" I was shocked! Not for the reasons you would think, but because he never told me that she was adopted, and I grew up at Ft. Hood, so there's all sorts of different family types there...nothing is new to me.

So, now that I knew who I was looking for, I was able to surprise her at her class!
This is the picture that we got that day: 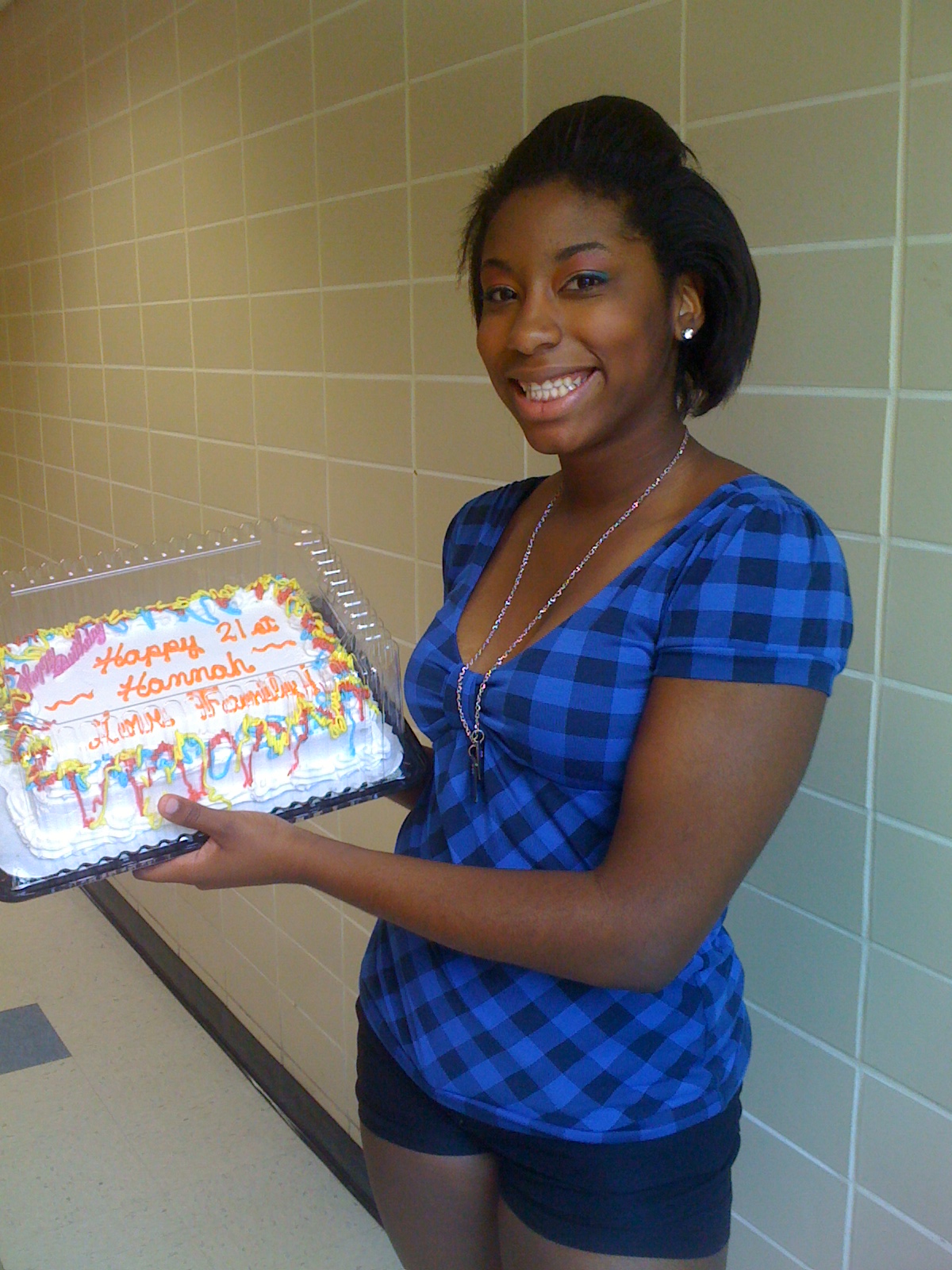 Now, regardless of what you think of me or of bloggers, social media does do good things.  Because of social media two people who had NEVER met managed to get together to surprise a third person!
I learned later that day how she came to be his daughter, and my admiration for him grew 100 times over.  To see pictures of his family, you know that LOVE knows no boundaries and that adoption is a wonderful thing!
To the Jackson Family...I LOVE all of you, even though I've never met all of you.

I LOVE Alex Toys! They always have something for parents and kids to do together.
I like to find crafty things to do with Monster, occasionally I find something from Alex Toys that is wonderful.

I'm a tad on the crafty side, so I love to include Monster when I try other crafty things.
We did these with a foam kit last week: 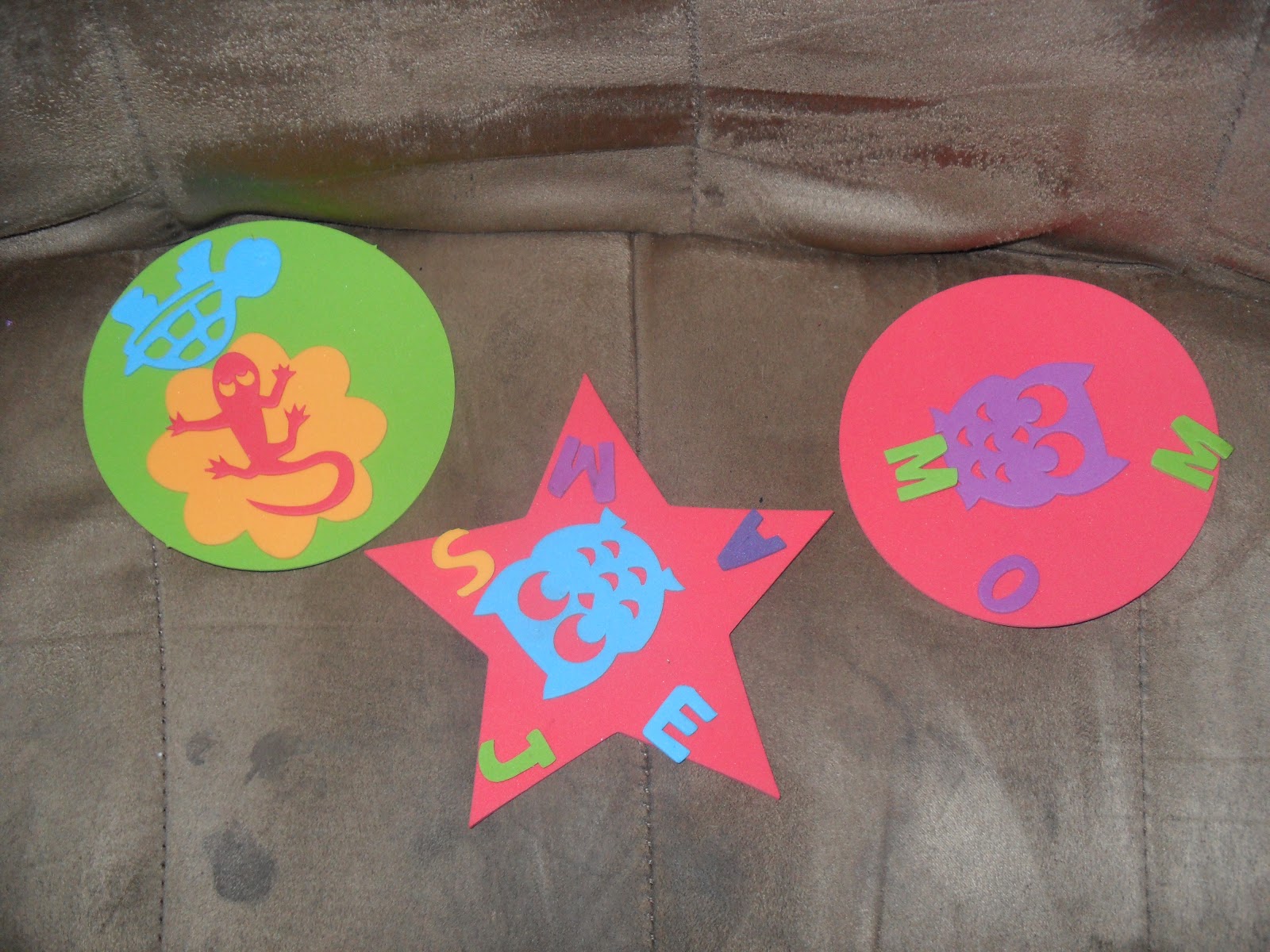 So, today Alex Toys are going on sale on Zulily and I'm gonna be first in line to get something for Monster!!
With Zulily you can get things at great discounts!!!
Did I mention that now until December 2, 2012 you can get $15 off your next order of $50 or more...this will more than cover shipping!
Remember to click HERE if you would like to get something!
Posted by Marci at 11/29/2012 08:10:00 AM No comments:

So, my Egg got this game in today and I think I actually want to try this one!

So, I really want to try this little thing! He's adorable and I totally forgot to get it on the LIGHTNING DEALS the other day!
I was too busy getting great deals for ya'll LOL!
So, yeah I think this is gonna be my Christmas Present to myself!

It's Another Day of Lightning Deals from Amazon!!!

It's Tuesday and I'm going to have to get more Amazon Gift Codes to give away!!
Here are some of the GREAT deals up for today!
And, yes I will be getting more codes this week!
So, first up, there is this beautiful
Swarovski Elements Black Diamond and Black Color Bicones and Sterling Silver Clasp White Freshwater Pearl Necklace, 18"

**Click this link -->  http://amzn.to/TkdLo0 to see the deals**
Then we have these AWESOME boots!
**Yes I sooo want these, and they fit me for those that know my tastes**
Wanted Shoes Women's Tec Knee-High Boot

These are just a few of the AWESOME deals coming up today!! I'm going to rest a little bit so I won't be online as much...most likely there will be a trip to the doctor for me.

Who is NOT a Disney Fan?
On December 6 at 10:00 AM PST there will be a new Fantasyland Reward through Disney Movie Rewards.  Yep, I'm getting this one...I'm glad I have the points saved up!
So what is the new reward you ask: 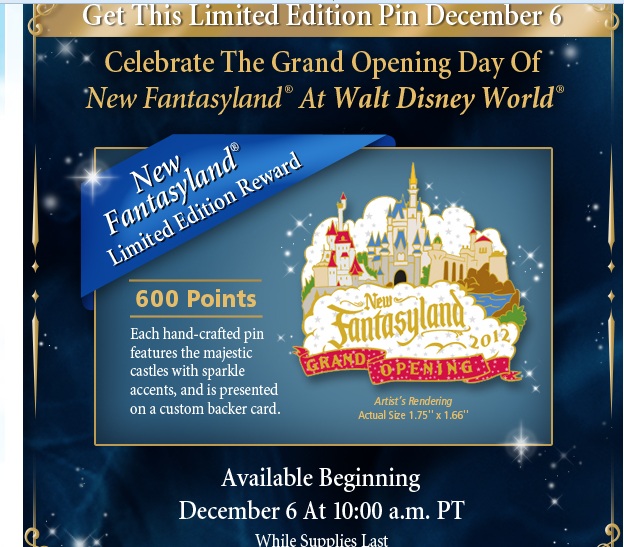 SneakPeeq has Melissa and Doug!!!

SneakPeeq has Melissa & Doug for the next FIVE DAYS!!!
Not only does Monster love Melissa & Doug, but I do also!
They're great for teaching the little minds.
When Monster first started walking I got him the Frolicking Frog : 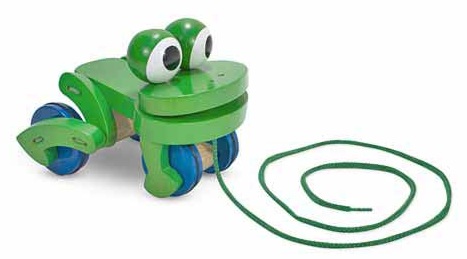 I would give you a picture of the poor frog today but it's in his room while he's napping!
BUT...these are on sale through SneakPeeq and Monster is going to get one or two of these for Christmas!!! 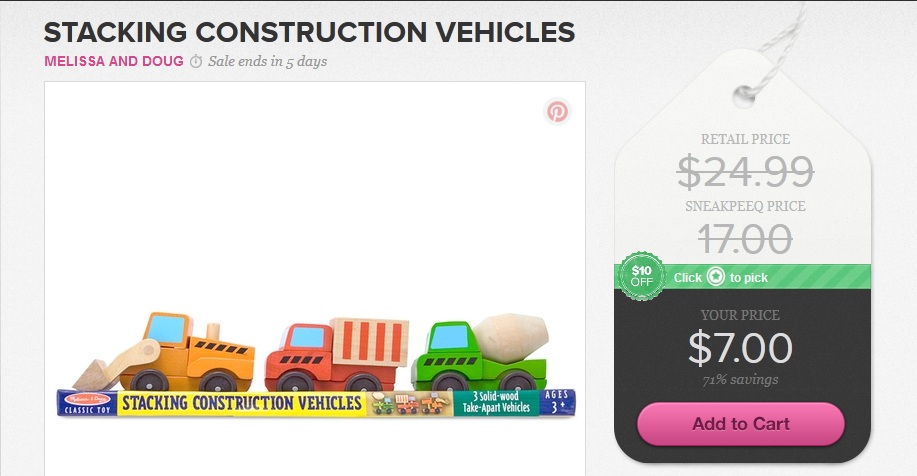 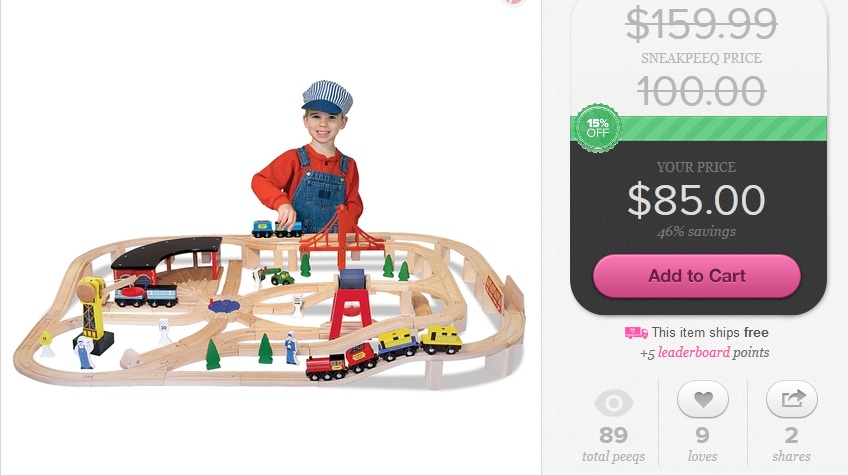 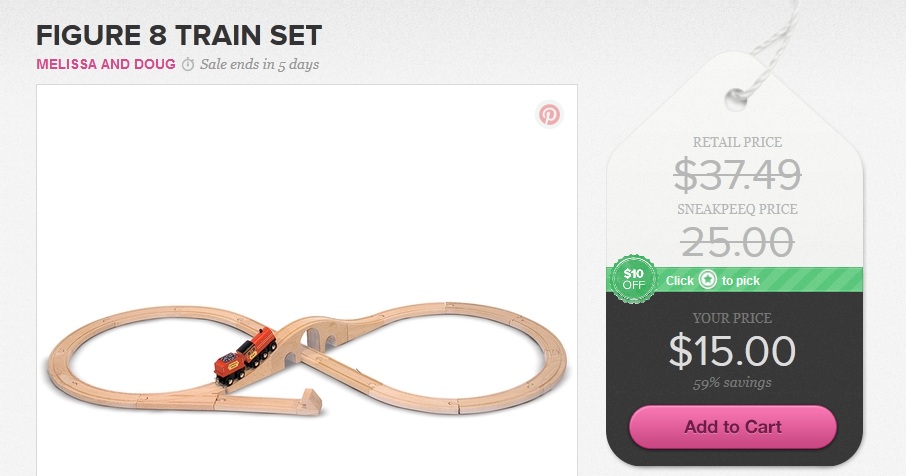 As you can see, Monster is pretty spoiled! Now, he's not getting all of these items, this is just to show you how great these deals are!  The $10 off badge is one I got from a couple days ago, but you're going to have to Peeq to find some more!!!
4UFX-KT2Z9M-XDVV

I always look at AT&T on Cyber Monday because they have AWESOME deals.
Today I got an iPhone 4 for myself and DH for only $.99 each!!!
BRAND NEW, not refurbished!!! 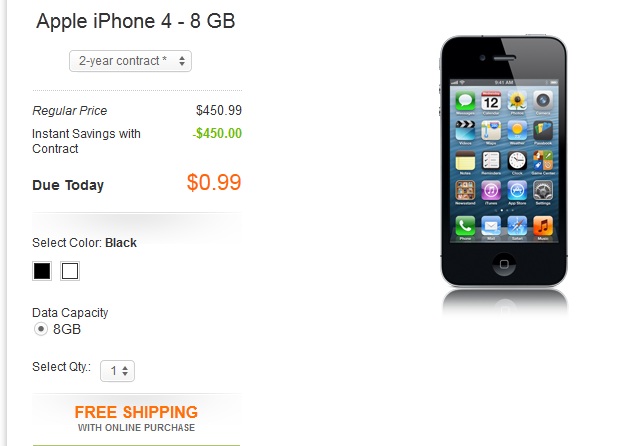 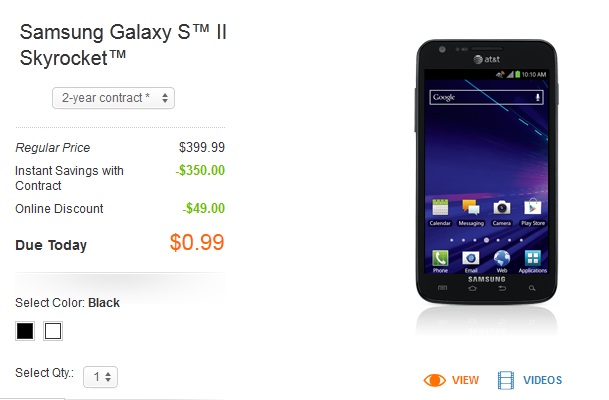 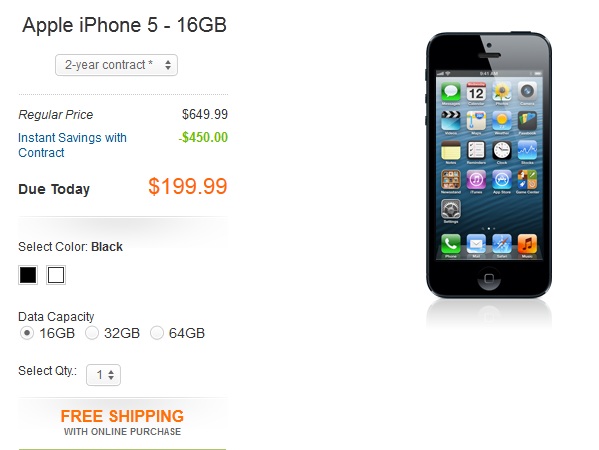 There a a lot of other great deals to be found, but you might want to hurry...these usually sell out fast!!!