Growing Up In Killeen

Three days ago there was a group started on Facebook called YOU MUST HAVE BEEN RAISEDIN KILLEEN IF...  Now, the really funny thing is, not two days before that I had someone accuse me of cheating in Facebook like contests because I’ve had such a variety of people liking my posts.  Then, someone posted this comment and I realized that not everyone grows up in a town like Killeen.  And, Killeen is a one of a kind town, where the children don’t know if they will have the same classmates for school after summer break, and EVERYONE can sleep through artillery. 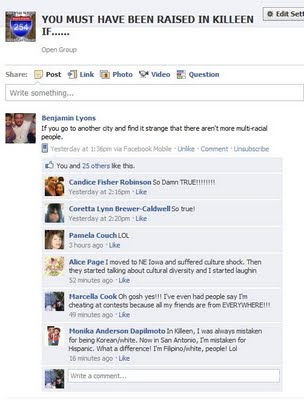 That first night that the group was made, I was one of the first 1,500 members.  By the time I went to bed there were over 1,800 members.  The next morning there were over 2,000 members.  Tonight, there are 5,595.  I don’t know if this is any record for Facebook, but I do know that all of the members of this group have one thing in common…THEY GREW UP IN KILLEEN.

There have been many different posts as people reminisce of the days when they were growing up.  Most of us had one parent in the military, but there were the few that were total civilians.  Even they were affected by things that happened on post.
There were many good posts like this one.  The year we won the state championships in football, the year I graduated. 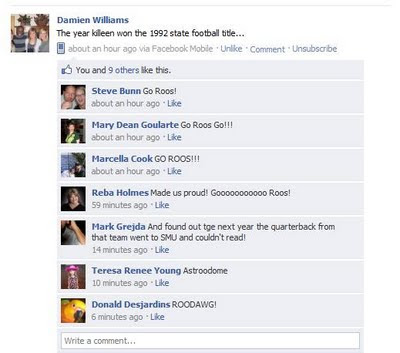 There were also posts like this one.  Raised on a military base, children learn the greatest of traditions, and no matter what, we learn respect.  And those values that we learned, we pass on to our children, even if we’re not associated with the military, or like me, your spouse is retired. 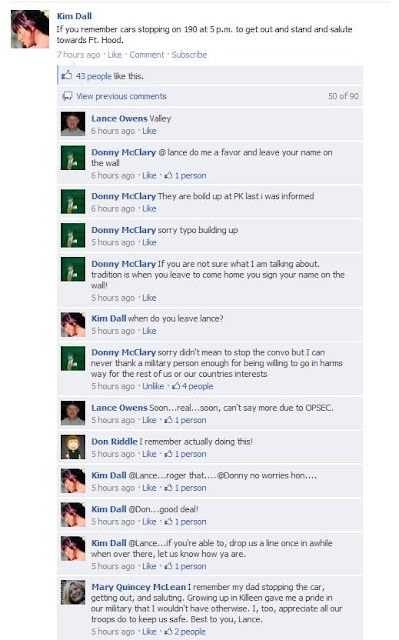 There is also common knowledge in Killeen that Elvis was stationed there.  That is something I thought everyone knew. 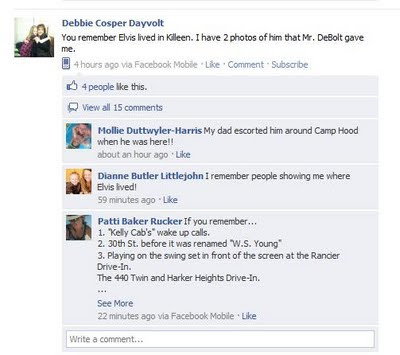 Many of us also have the bad memories.  The Luby’s Massacre was one thing that we all remember.  There was the Gulf War also.  Many of us grew up with all of this.  We grew up respecting the military.  Those lessons are with us to this day.  As Killeen continues to grow, it will always be called a town, K-Town.  No matter how far away you go, or how long you’ve been gone, there is always a small part of you that wants to go back.  Killeen isn’t a town, it’s a culture!  And, it’s one culture that I’m proud to have in me.  What about you?
Posted by Marci at 8/05/2011 12:36:00 AM 1 comment: