So, I won a trip on twitter.  From Belk, to enjoy the Belk Bowl.  Yeah, I'm having FUN!

Yesterday.
It started out horrible as there was some very loud people across the hall at our hotel that woke me up at 0230.  I couldn't get back to sleep.

Around 1000 Mike and I decided to head to the stadium for our adventures.  And, boy did we have fun.
Without further adieu I will show you a lot of pics that I took and update more later.

BUT, first...I would like to say "HI" to all my new followers!! HIYAS! And, second...there will be a more detailed post coming this week. 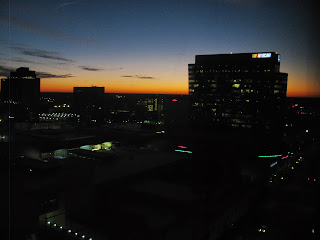 This is how our day started. 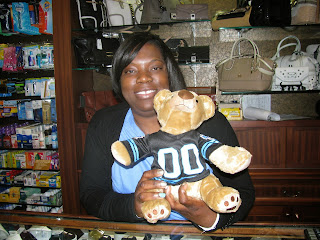 Such wonderful people at this hotel! 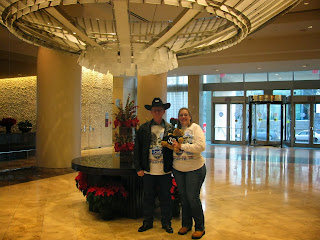 Mike and I (along with Belkie) in the lobby of the hotel! 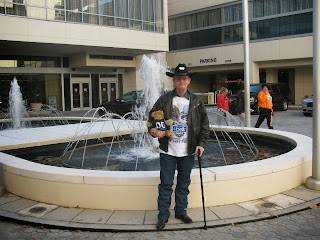 Mike and Belkie in front of the fountain outside the hotel. 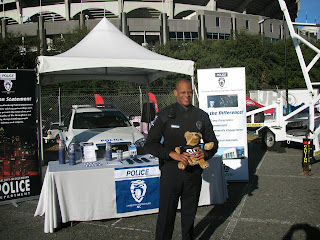 One of Charlotte's police officers was kind enough to pose with Belkie. 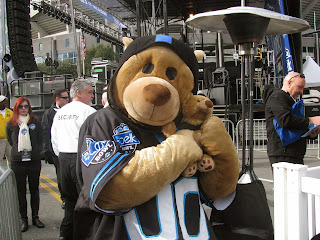 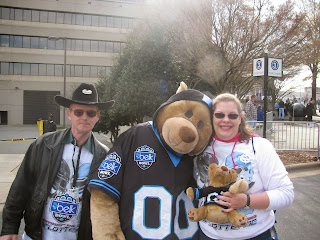 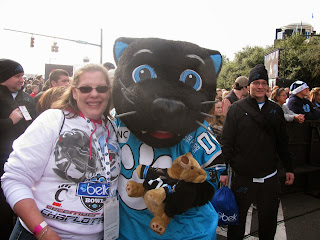 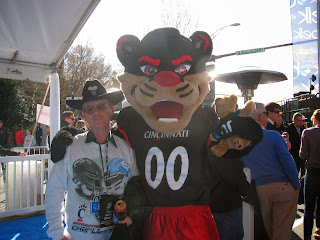 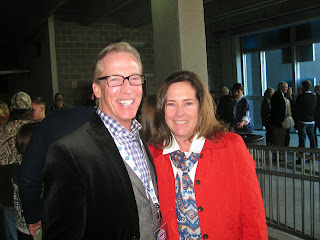 Yes, we met the president of Haggar
. 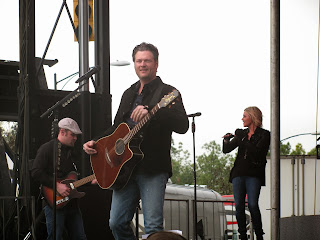 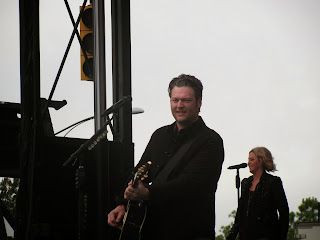 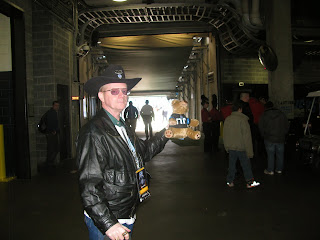 Inside the tunnel getting ready to go ON THE FIELD! 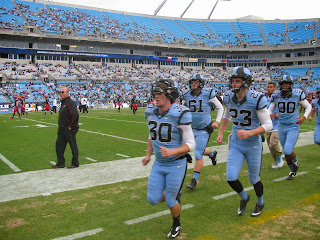 We were this close to the football players during pregame! 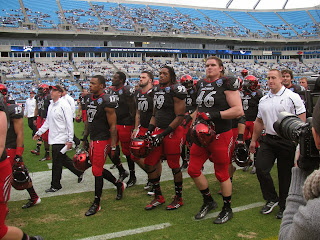 What an AWESOME experience. 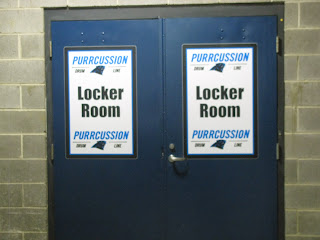 Yes, I had to get this pic!  Just too coolies! 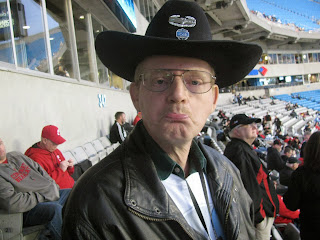 Oh, I soooo told Mike that I was putting this one on my blog.  He actually had a GREAT time and posed for a lot of pictures. I'm so proud of my husband! 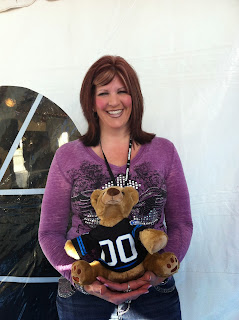 Belkie was having so much fun! 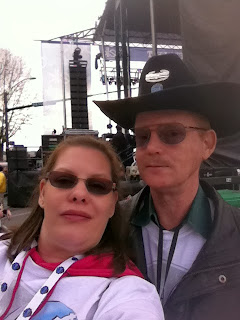 We don't get too many good pictures of us, and I LOVE this one! 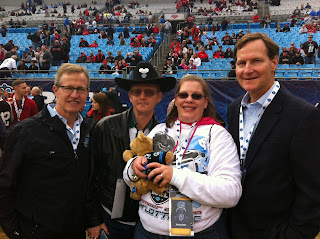 I ran into both of the Mister's Belk on the field!  They're awesome people! 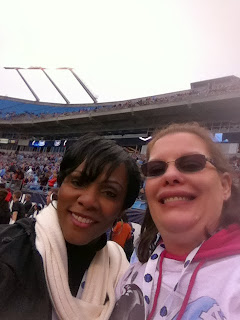 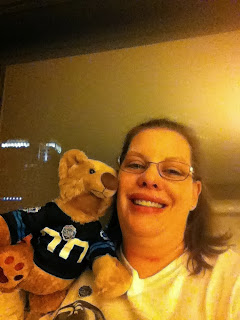 After a VERY long day, we're back at the hotel relaxing.

There will be another post of the adventures of Belkie, because he had a great time also.

I want to say a special Thank You to all the wonderful people at Belk for this trip.  Especially Ruthie, Tigi and April.  Also, the wonderful staff at The Westin Charlotte for exceptional service.
Posted by Marci at 12/29/2013 03:39:00 AM No comments:

Most of my friends and fans are saying it's cold outside.
Yesterday, we were experiencing severe weather.
Like...Tornado weather!

That didn't bother Mike.  He told me, let's go eat something so we can do Christmas shopping.
Now, when Mike says shopping, I jump at the chance.  He would rather do ANYTHING before going shopping.
Like.  Anything.

So, we went to the Lufkin Mall.  It's not big, but hey, it's what we have in this itty bitty town.
We go into one store and I see it started raining again, so I say "lets go and look at something else", you know...to try to kill time until the rain stops.

The problem with that was...we had already bought the gifts we needed to get.
So, Mike said lets go look at those earrings again that we looked at last week.
Hey, the man is buying me JEWELRY...I'm not saying NO!

We head down to the store, talk to the same associate that we talked to last week.
He remembered us but couldn't exactly remember where the earrings were.
Sooooo...we're looking.
We've got it narrowed down to a few different pair, and we're comparing them.

All of a sudden, all three of use notice that the wind is picking up and the rain is coming down harder.
Now, we live in East Texas.  When there is a severe storm warning, everyone usually just goes about their business because we get severe storms ALL THE TIME.  No biggie right?
NOT!

Right after we said that the wind was picking up, it got really windy.  Like, shaking the ceiling windows windy.  Right above the Santa picture area.

The associate tells us to come into the store at that time because we were on the outside part of the display, which was on the corner of the store.  He quickly locked the earrings up again, and ushered us into the store.  Right at that time, the lights went out and the wind really rattled everything.  Everyone was running into the stores and away from those windows.

I've never been shopping during severe weather, and I wasn't really scared...though the little kids that ran into the store with their parents were.  So, Mike and I did what we do best (apparently), we started asking the kids questions about anything to get their minds off of being scared.  There was a little girl with reindeer antlers and a kitty cat shirt on that we just started asking her questions about her antlers and shirt.  Her parents looked at us with that profound look of "THANK YOU"!!

It was over in a few minutes.  It was a shopping trip I will never forget.  And that little girl probably won't forget it either.  But, I got my Christmas present.  Yeah, I know it's not Christmas yet, but when you're there while it's being bought from your husband, you really don't want to wait!  Especially with these pretty earrings.  OMG they're so sparkly!!! LOL 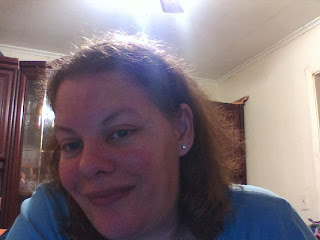 I Still Believe in Good People!

Anyway, one of my incredibly scatterbrained friends did something, well, scatterbrained, the other day.
She LEFT her iPad at McDonald's!

And, thank goodness for honest people.

Because, soon after she left it there, this flooded all of her friends' timeline on Facebook: 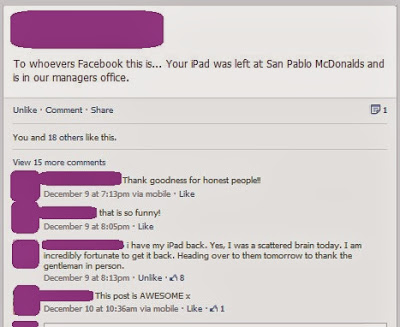 Yes, they didn't know who it belonged to, so what they did was post a message on the Facebook account that was signed on.  Needless to say, friends tried to text her, but she didn't answer.  She had put her phone away...LOL.  So, her friends did the next best thing, they texted her teen, who then comes in the room asking her where is her iPad?  (Doesn't this sound like something a parent would do?)

Needless to say, she got her iPad back, and the gentleman that found her iPad is an angel.  As my friend said on her page, times are tight...he could easily have sold that iPad, but instead did the honest thing.

When you are faced with a decision like this, what would you have done?  Honestly?
I'm always doing "random acts of kindness" and I love to hear about others doing the same thing.

So, even with everything else going on...I still believe there are good people in this world.

For Lack of a Better Tittle...

Yes, this is one of those posts.
Where you wait for hours until you're calmed down enough to think coherently...
where you're eyes are still puffy from crying the night before...
where you can't BELIEVE what you have been accused of...
and the people don't even have the audacity to tell you to your face.
Yeah...it's one of those posts.

First, let me say this. (Without names of course)
Everyone knows that I don't get along with my family. I've always been different from my family.
When my husband and I got married, we decided to make our family about US.
Not his family, not my family...but US.
We did this for a reason.
My family sucks!  Big time!!!
They don't have the same values that I do.  They don't have the integrity that I do.
My husbands family is just distant.  And, we're OK with that.  We always have been.
I DO NOT say anything negative about them.  I have the utmost respect for them.  ALL OF THEM.
It's just that we don't get along as well as other families.
Two incredibly strong willed women in the same room does not make for peaceful conversation.

With that said...I HAVE NOT, NOR WILL I EVER SAY NEGATIVE THINGS about a certain person.
Because of how far this situation has gone, I'm being general.  I want it that way so that I can't be ACCUSED again of saying negative things about someone.

Now, the person and/or people that have accused me of this is someone that I know.
I wasn't told the exact specifics, but was told that I would see the accusations and documentation when the time came.

Now, for the other part of these accusations, which is totally appalling to me.
I was told that there were complaints from mutual people that I "share too much on Facebook".

Which is why I spent all of last night crying my eyes out.  Not only have I lost friends, but things in certain situations have gone way past simple drama.  I'm leaving a group that I care very deeply because I don't like fighting, and would rather avoid it.

I'm sorry to rant, and I'm sorry if this seems disjointed, but this is how I feel.  I'm hurt and I'm in shock.
Still.

Oh yeah, I was also told, not to share anything on Facebook...for those that want to accuse me...THIS IS NOT FACEBOOK.  And the last time I looked, the first amendment gives us freedom of speech.
I haven't said anything specific about anyone.  I haven't said any names.
So, go ahead...BRING IT.  I WILL STAND UP FOR MY RIGHTS!

So, everywhere you look, you can find the "Money Saving Challenge".
But...what about those people that only get paid once a month?  To save something every week is hard.
Soooooo...I've come up with my own challenge for this next year.

It's a "Reverse 52 Week Money Saving Challenge".  Not only will this help you with the monthly savings, but you can also see more in your savings sooner.  So, you can actually feel like you're accomplishing something!! Which for me is a big deal because I like to see results, and I'm kinda impatient.

How does this work?  Well, it's almost all backwards...but you still build up to saving the most at the end of the year.  So, without further interruptions...
Here it is:

I hope that you take the challenge, and in doing so keep me accountable!  I will update as often as possible, but we all know how things happen.