How Does A Couponer Teach Factoring To A Visual Learner?

If ya'll have been following my facebook page, you will notice I've been mostly gone these past couple weeks.  Where have I been?  Helping Mike with Algebra.
Now, first, I'm going to tell you that I kept telling him that it was too fast paced for him in the summer.  His words..."I already know this, I just failed the final last time."
FAMOUS. LAST. WORDS.
So, he's pulling out what little bit of hair he has left, and I'm on the edge of pulling mine out.
And now we get to...
FACTORING!
And how does he respond to this???
Not well.  And, this semester, I decided that I'm not going to argue with him over this.  When he starts arguing with me or raising his voice, or just agreeing with me to get to the next question without the understanding, I have walked out, until he calms down and asks for my help again.
(Yes, there's a story to why I'm walking out and making him calm down!)

So, now we get to the hard question tonight...Ready???
a6 – 3a5 + a – 3
How can you teach a visual learner how to factor this when there's that tricky invisible 1 next to that last a?
We tried writing it down on paper...we tried factoring the first part and then instead of the parenthesis just substituting an x...we tried just about every trick I knew.  He started agreeing with me...yep...whatever you say.  I walked out in tears, and he's slamming things around.
Then it came to me.
VISUAL...he has to see it.
Soooooo....I asked him to come to the living room and brought out all my little shampoos and conditioners that I had been able to get. And...I put them down like this. 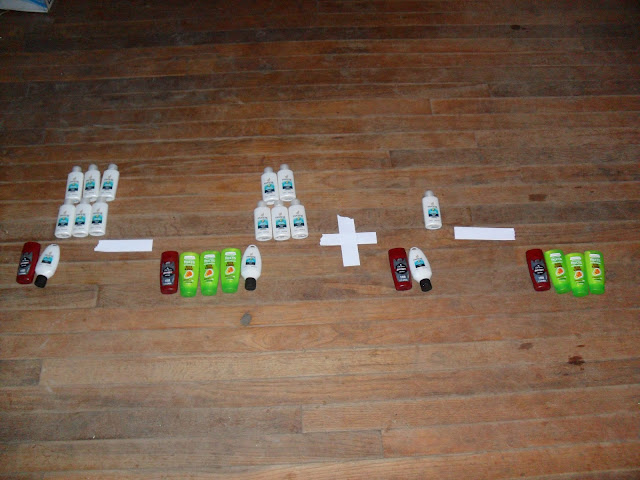 Doesn't this look like the problem.  Imagine the red bottles are invisible 1's and the bottles up top are the exponents.  This was the problem.  Now to break it down to how he could understand it. 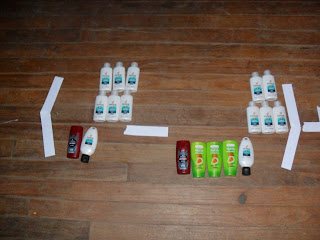 I needed to put it to where he could see the parenthesis and the invisible 1.
So it was broken into two different equations to factor. This one is
a6 – 3a5 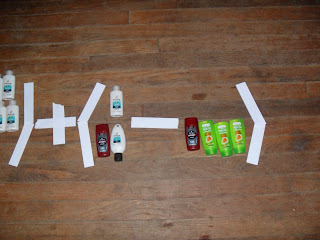 This was the second half of the equation which was

Now the trick was to show him how AND why there were not TWO of the a - 3
He kept wanting to take the a of the second equation, and I'm pulling out my hair to try and show him why he couldn't do it that way.  Soooo....now that I broke it down into visible items that he could see, he was with me this far.  So, I then proceeded to factor. 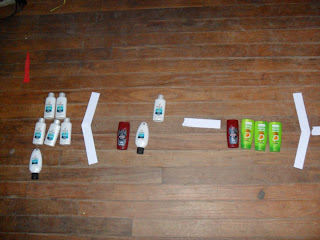 
So, he could see it with the invisible 1's there...those are the red bottles. 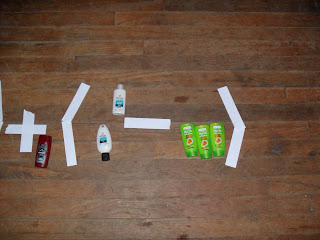 And for this one, I had to factor out the invisible 1's.  This was all to show a point which he just wasn't grasping.

(a – 3)?
I then showed him that even though I took the
(a – 3)  out of both sides, it was still attached to a variable on each side.  And that was what was catching him.  He could factor if it was just one number or one variable, but the parenthesis messed him up...until I showed him with all these bottles.  And this is the final outcome. 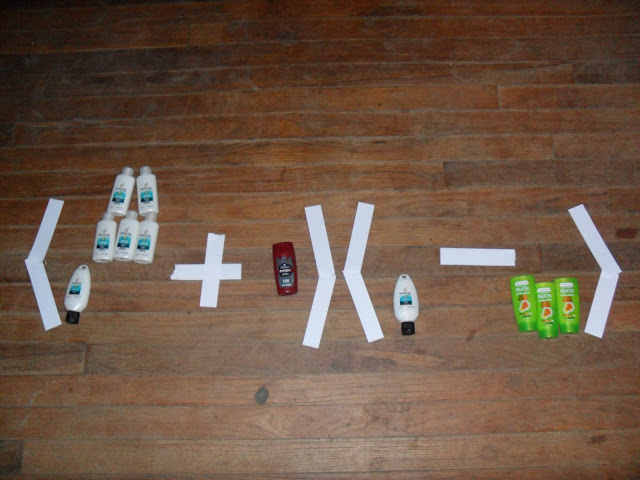 After TWO frustrating hours, it took 20 minutes of me showing him with bottles of shampoo and conditioner how to do factoring.  And this is how the answer looks with the numbers instead of the bottles.
(a5 + 1)(a – 3)
And there was a light bulb that was shining so bright above his head, a smile on his face, and understanding in his eyes.
And, this my friends is how you teach factoring to a visual learner!!!!!
Posted by Marci at 6/18/2013 12:31:00 AM No comments: