You Have a Baby on Your Back

﻿When DH and I found out that I was pregnant in October of 2008, it was kind of unexpected, but also planned. We had talked about having a baby, but didn’t think that I would get pregnant so soon after we had made the decision to start our family.


When I first found out I was pregnant, I started doing research on what baby stuff I had wanted to get. For the first time, I was in a position to be able to afford some of the things I wanted, instead of only getting the necessities.
I spent weeks researching what stroller I wanted, what car seat I wanted and other baby items. DH and I had planned on going to baseball games with the baby, and I knew that a stroller or infant car seat was not allowed in the stands. Therefore, we decided to look at baby carriers. I wanted something that was easy on my back and easy on the baby also. I had planned on breastfeeding, so I also wanted something that I could easily take off. I also did not want a baby carrier that I had to wrestle with to get the baby in and out of it.
One big consideration and reason we had wanted a baby carrier was because of the farm. I was the one that dealt with customers, and most of the time sold the chickens. I had to be able to have a carrier that could hold the baby and also allow me to still catch and handle chickens.
All of these things had to be considered.  I was not going to buy something that could only be used for a couple of months.  I wanted something that would grow with the baby.  And, I found the ERGObaby Carrier.
With the ERGObaby, not only could I have something that would grow with the baby, but I could use it when he was newborn.  I could breastfeed in it.  I could convert it to be worn on the hip, and it could also be used on my back.  I thought this was perfect.
When Monster was born, he was early so all of our plans had been thrown out the window. I was unsure of using the baby carrier with a baby so young, so I did yet more research. That’s when I found that there was an Infant Insert that would cradle Monster when he was so little.
It wasn’t long after Monster came home from the NICU that I was back to selling chickens. There were times that I could arrange for customers to come and get the chickens during Monster’s naps, but there were also those unexpected customers that just dropped by.
When that happened, it was very easy for me to put Monster in the ERGObaby, and take care of business.  There were also times, when he was just fussy and colicky.  Nothing would soothe Monster.  He developed the like for me walking with him real early.  Boy, am I glad that I bought this thing.  There were many nights when he just wouldn’t go to sleep, and I would put him in the ERGObaby and walk around with him. 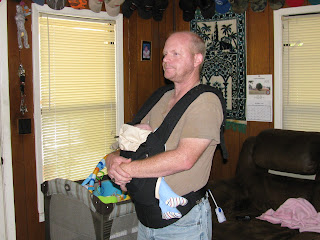 Now, as he has gotten older, Monster doesn’t like me to be out of his sight. This makes for a very had time doing housework. When he gets in those moods where he wants to be held, I just pull out the ERGObaby and strap him to my back. I NEVER leave him alone in the house, so when I have work to do on the farm, he gets strapped onto my back and we both work on the farm together.
This ERGObaby carrier has not only made my life easier, but it has also made me closer to Monster. He gets the advantage of being with mommy and having cuddle time, and I have the advantage of knowing he’s not getting into mischief while I’m cleaning or cooking.
I take it everywhere we go. Usually when we go to the store, I put him in the ERGObaby instead of the baby cart because I know that he’s safest on my back. He likes being able to look at adults at our level instead of being down low like in most shopping carts.


Recently, we took a trip to Houston for a mini family holiday. When we got to the hotel, I had forgotten to ask the front clerk something, so I needed to head back up there. DH wasn’t feeling well, so I took Monster with me to the front desk, of course on my back in the ERGObaby. I had passed someone in the lobby and in the most startled tone he said, “You have a baby on your back!” I had said, that yes, I have my little one with me all the time and he’s quite spoiled.
The next day, we went to and of course had the stroller and the ERGObaby.  Needless to say, we didn’t use the stroller much.  Monster was getting tired and wanted a nap, but he will not go to sleep in the stroller…he’s too nosey!  This is when the ERGObaby carrier comes in really handy.  Not only was I able to cuddle him, but I was able to pull the sun cover up over his head and block out most of the distractions that normally keep him awake.  With the sun cover out, I also covered him with his blankie.  He was able to fall asleep listening to my heart and feeling totally relaxed.
But, I don’t see having Monster with me all the time as spoiling him.  I see it as nurturing him and giving him the security that all babies should have.  It doesn’t bother me to put him in the carrier and do the dishes, or walk around the store, or catch chickens.  It doesn’t bother me that he’s used to being with mommy all the time, because I know that I’m not only keeping my son safe, but I’m also building a relationship with him. 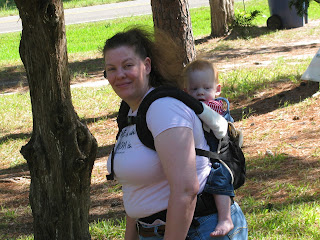 ERGObaby is going to give one of their carriers to one lucky reader of my blog!!!

**Important--you must leave a separate comment for each entry**

Grab my button and add it to your blog (two entries)

Contest will end on October 28, 2010 at midnight Central time.
I will pick one person using random.org and contact that person by email, they will have 48 hours to respond, or I will choose another winner.